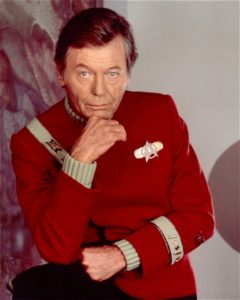 The idea of an award and recognition scheme is intended to be a subtle way to build a spirit of community and service among the members of STARFLEET Medical.

This edition of the manual sees a move away from the previous system of using ribbons to designate awards to a series of unique designs that are the intellectual property of STARFLEET Medical. Anyone who received an award under previous iterations of the scheme is fully entitled to wear them if they so wish. The change of design, and, in some cases, of name does not in any way detract from the achievements that have been previously recognised.

All STARFLEET Medical awards are recorded in the SFI Member Eligibility Record.

The awards and their criteria can be found be clicking on the relevant category from the menu. Full details are also available in the manual which can be downloaded on this page.

Applications for nominations are equally welcomed from either the member concerned or from others.

For each award, full information must be provided; failure to do so will cause a delay to the issuing of the award.

Unless a delay in awarding is requested, for example to allow for presentation at a chapter or region event, awards will, when approved, be sent directly to the relevant ASG for presentation. They will be announced regionally as well as being announced on the main STARFLEET Medical Facebook Group.

Applications should be made directly via the form that can be accessed from the menu.

The latest approved edition of the Awards manual can be found here: